Recently, a commenter on one of my NFP posts wrote (my emphases throughout this post):

Holy cow. I can't believe it. Someone is actually daring to question NFP, the "good and moral" Catholic birth control. It's about time!!!!

Yes, indeed; since I first started writing about NFP in a way that questioned the mainstream perspective, I noticed that NFP was something of a “sacred cow”.

The above commenter notes that she and her husband learned NFP in pre-Cana classes, and, before their marriage, she discovered problems with her cycles. An OB’s determination was that she would be unable to have children naturally.

I was crushed! We had originally planned to use NFP for a year or two to "get used" to being married and to get on our feet financially. However, since I didn't think we could have kids, we dropped the thought and just lived... Then we got pregnant two months after the wedding. We had a beautiful baby girl.

Shortly after she was born, I got pregnant again, then miscarried. It was at this time that my Protestant mother-in-law pleaded with me to use birth control because it would be unhealthy to get pregnant again so soon after a miscarriage. I told her we wouldn't do that, but were considering NFP. Her response? "Oh! So you have Catholic birth control? Great!"

This statement bothered me a lot and started my journey. I read every Church statement from the past that I could get my hands on regarding fertility and marriage and children. I read about prudence and God's Providence. I read all the NFP books that I had. I watched an episode of EWTN's "NFP: Embracing the Marital Gift."

My conclusion was that I could never, in good conscience, use NFP. I know the Church has approved it and encourages it- but it's not doctrine and those teachings can change. I am free to disagree... and I do. I refer to NFP as a current trend in the Church.

That’s right. The use of NFP is not “doctrine” and there is no Church document that requires couples to use it or even learn it. Unfortunately, there are NFP proponents who refuse to allow any questioning of the use of NFP. Our current commenter adds:

I mentioned my reading and thoughts and- WOW- people get VERY ANGRY when you start messing with their "approved" method of spacing children… It got pretty ugly and I lost almost every single college friend over this. They thought I had lost my mind. People – good people – who I had looked up to, hurt me pretty badly. All because I dared to question the morality of NFP.

I have heard a similar story from at least one other reader of this blog, and I have experienced it myself. Even medical professionals experience it. One doctor who specializes in fertility issues told me that in his speaking engagements

…I always come to a discussion of NFP. Then I sound like a politician (both for it and against it). That has developed to avoid the open warfare when I say that over-reliance on NFP as a means of preventing pregnancy is as bad as contraception itself.

Heck, I’ve been criticized even by people who have not read what I’ve written! For instance, when Steve Koob of One More Soul invited me to be on his radio show, he let some NFP professionals know that he was interviewing me. One of these professionals said: 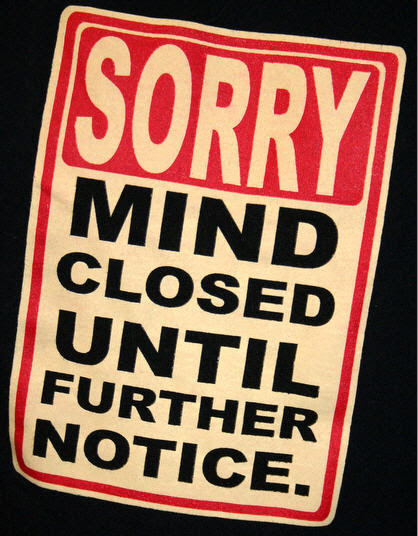 My comment is that [Dr. Boyd] is heretical, i.e., contrary to Church teaching. But I have not read the book. Not sure it would be worth the time…

Way to be open-minded! He hadn’t read my book, but was pretty sure it was heretical, and wasn’t sure it would be worth the time to read it and find out for sure!

From the brief look at the blog, the protagonist appears to be partly a providentialist (God will provide, period) and partly has a residue of Janssenism (sex is basically sinful and has to be redeemed by procreation) couples are free to practice NFP or not, but they are not free not to practice responsible parenthood… Let’s not revive the controversy about grave vs. serious reasons for avoiding more children… that’s been done.

I’m not even going to attempt to dissect that one. A third professional opined:

What troubles me is that writings like hers get good coverage and play at conservative Catholic Web sites.

Now, here’s the question that is gnawing away in my brain: why are these people so invested in NFP? It’s a dilemma. For instance, one of the NFP professionals even noted:

…It still irritates me that NFP teachers and the practice of NFP is called to question -- with only .1% of current couples using NFP and maybe .2% of Catholic couples - is NFP really the problem?

That estimate of NFP users is much lower than the 2-5% I’ve heard bandied about! And even if it were 5%, I have previously opined that NFP isn’t really the problem; in my post “The Saving Grace of NFP” I wrote:

Now, the phrase “contraceptive mentality” generally throws NFP advocates into a fit. By this term I mean: a) society’s general acceptance of the necessity of limiting family size for a variety of reasons, generally through the use of artificial contraception; and b) the general acceptance – and even expectation – of the use of artificial contraception by young unmarried women in order to prevent pregnancy when these women engage in premarital sex (which also seems to be expected).  I do think that society’s general outlook on contraception has influenced the use and promotion of NFP; it’s just that NFP is not contraception per se.

So I have softened the blow in other posts by suggesting we just call it a “birth control” mentality. There can be no doubt that NFP is birth control. NFP promoters talk about “taking control of our fertility”; there is talk about “spacing” births; there is the option of using NFP to increase the likelihood of pregnancy. These are all about controlling the number of births that a couple might experience.

I believe the “birth control” mentality is a problem, because it perpetuates the myth of overpopulation and the need for “responsible” parenthood, and tends to overemphasize the importance of the marital act in the marriage relationship.

That still doesn’t answer the question of why NFP advocates and promoters become so angry and defensive when anyone disagrees with them, though. Perhaps the answer is that questioning the use of NFP means questioning the false sense of autonomy many Catholics have with regard to “forming one’s conscience”. Many Catholics talk about conscience, but few understand that one’s conscience must be properly formed according to the teachings of the Church. It’s the improper formation of conscience that has led many Catholics to accept artificial contraception, homosexual marriage, and even abortion with no qualms. And it is “conscience” on which NFP users rely when deciding whether or not they think God wants them to have another child.

Further, I suggest that the failure to correctly understand conscience flows from the personalist and existentialist notions that have crept into the minds of Catholics by way of some of the verbiage used in various Vatican II and post-Vatican II documents – verbiage that suggests that saying “I prayed about it, and I feel it’s right” is the only justification needed for one’s actions. That’s called moral relativism.

Questioning NFP means questioning a lot of things. It means questioning why we teach girls that having a career should come before having children; why gender roles are down-played so much these days; why sex is so over-valued in our society. And I’ll bet you can think of more “why’s”…

In other words, questioning NFP means questioning the whole middle-class lifestyle that has evolved in the US. That can be a bit threatening, I suppose.