In Monday’s (Jan. 21) Vortex, Michael Voris discusses this news from Rome via Zenit:

You can read the entire (short) article here. Some of the highlights are these paragraphs (my emphases): 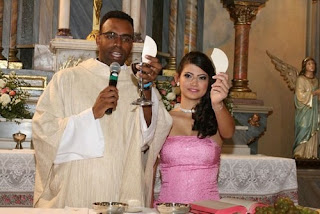 …The prefect of the Congregation for Divine Worship and the Sacraments criticized existing abuses such as showmanship, and praised moments of silence "that are action," which enable the priest and the faithful to talk with Jesus Christ and which exclude the predominance of words that often becomes showmanship on the part of the priest…

…The cardinal criticized the effort to make the Mass "entertaining" with certain songs -- instead of focusing on the mystery -- in an attempt to overcome "boredom" by transforming the Mass into a show.

Well, it sounds like they’re on the right track! I’m happy that a new publication will be addressing these issues, but as Michael Voris comments at the end of the Vortex, the people who are invested in liturgical abuse will not be happy to receive the news, and they will likely ignore the instruction. After all, we have had a couple of instructions already – notably, there was Redemptionis Sacramentum, in 2004. That document, while claiming “liturgical reform inaugurated by the Council has greatly contributed to a more conscious, active and fruitful participation” in the Mass, also acknowledged that “shadows are not lacking”, and that

In this regard it is not possible to be silent about the abuses, even quite grave ones, against the nature of the Liturgy and the Sacraments as well as the tradition and the authority of the Church, which in our day not infrequently plague liturgical celebrations in one ecclesial environment or another. In some places the perpetration of liturgical abuses has become almost habitual, a fact which obviously cannot be allowed and must cease. (RS, 4; my emphases)

Some of the wording, as you see above, was pretty strong. RS even called some abuses “reprobate”! And yet…not much attention was paid. Not much changed as a result of that document.

But, hope springs eternal! Maybe Michael Voris is right; maybe this new document does mean that the powers-that-be are starting to seriously consider the effects of 50 years of bad liturgy.

Here’s the Vortex, with the script below:

In further evidence of the epic failure of Church leadership over the past 50 years – AND a sign of encouragement that at least some in the Church are finally trying to change course – the latest news out of the Vatican is noteworthy.

The Vatican is preparing what amounts to an instruction booklet for priests AND the faithful on how to properly attend Mass - meaning with reverence and piety and a worshipful soul.

Imagine this for a moment. Things have gotten SO bad that the Vatican has to issue what is essentially a “Mass for Dummies” handbook.

Underscoring this, late last week, San Francisco Archbishop Salvatore Cordileone gave a speech in London England and during the Q & A he lamented rather dramatically – according to those in attendance – the woeful and near disgusting lack of silence in the Church before and after each Mass.

What Catholics – the average Joe Catholic sitting in the pews – have failed to grasp is the enormous drop off in authentic worship that has overcome a HUGE number of people sitting at Mass each week.

They simply do not know or understand – AND have no real grasp that they DO NOT KNOW – just how bad things have really gotten at Our Lady of Suburbia. And what’s more, a large number of priests are equally in the dark.

They haven’t been trained enough in theology; they haven’t been formed sufficiently spiritually to grasp just how miserable conditions are at Mass each Sunday. Not that all of this is their fault.

Ignorance of the truth does excuse a person, to a degree. Just exactly to WHAT degree will be adjudicated by Our Blessed Lord;  but in the meantime, this ignorance must be overcome.

So…enter the Vatican’s new manual that they are hoping will be out by the summer. We’re told there are some rather direct (THANK YOU!) comments in there about priests needing to stop being showman. Yep.

The Mass is the central act of worship, the HIGHEST expression of our Catholicism, because it is offering to and worshipping God in the precise manner in which He Himself has commanded it: DO THIS IS MEMORY OF ME.

Stated in another way from the Vatican cardinal leading the work, the Mass “is the adoration of God and the salvation of men, which is not a creation of ours, but source and summit of the Church.”

The cardinal also blasted the idea of entertaining music being played and certain songs being sung that are meant to evoke an emotional response and help overcome boredom.
Yep. Clearly he’s been to practically any parish in the United States on any given Sunday,  where the “audience” is treated to a nice rendition and medley of Protestant hymns like “Amazing Grace”, as well as syrupy-sappy 1970’s and 80’s Catholic hits suitable for banjo and drum accompaniment.

We’ve attached a link to the news article that offers more detail. It’s well worth the read; but in the meanwhile, it’s worth considering, again, that: a) this is being done…GOOD! And b) that things are so off track, it NEEDS to be done…BAD!!

Now this is gonna go over like a lead balloon with many of the baby boomer Catholics who rather like this Church of Nice – and we’re talking about priests as well as laity. They don’t go to Mass to worship God, they go to worship themselves – so instructions from that old man in Rome are not gonna be received joyfully, will be opposed, will be spoken of in derogatory terms either explicitly or implicitly and slyly by the more career-minded.

But they can throw fits and whine and yell that the Church is out of step, is trying to return to the Dark Ages, and all their usual talking points all they want. The fact is, things are severely messed up, and little by little, steps are being taken to fix them.

While it is proving to be ONE VERY LONG day, this much is certain: the sun is continuing to set on the modernist Catholic crowd. Pray that a peaceful night will soon be upon us.
Posted by Jay at 5:48 AM