From an anonymous contributor:

Even if we agree to accept any reason as valid justification for use of NFP, we are left with a very knotty problem that haunts all NFP discussions: “How does one justify the conscious, intentional, and planned indulgence in sexual activities that purposely and purposefully seeks to frustrate the natural perfection of the sexual act?” 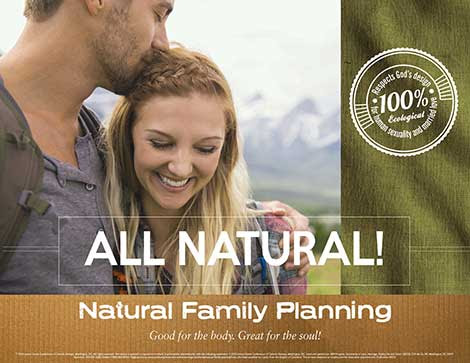 In the days before we had all the choices that science gives us today, this was an almost unthinkable problem. We didn't know that one could precisely plan to sow in the fall and winter, when no crops were likely. We always knew enough about seasonal cycles that, if we wanted to grow crops, we had to sow in spring and summer. That's the nature of farming. You do all the work of farming in order to grow crops to harvest in the fall.

But how is it a good thing to sow seeds – intentionally, purposely, purposefully – during a woman's monthly equivalent to fall and winter? Before we had these “modern” choices, married couples just followed common sense and did what married couples have always done: they engaged in the marital embrace when they felt like it. Sometimes it was during the monthly “fall” and “winter”, other times (actually a much narrower time) during “spring” and “summer”. Such couples devoted themselves to the raising of children schooled (hopefully) in the ways of God, helped each work out their salvation in fear and trembling and dependence upon God, and wound up having large families.

It is unimaginable that we could ask couples from the past, “How many children do you plan to have?” Yet today, almost every newly married couple is asked that question. It's just assumed, by our culture, that it is “responsible” to have only the number of children you want and believe you can afford to raise properly. Our Catholic ancestors didn't have such choices, and in that respect they were closer to consecrated religious: just as with farmers, life itself invited them to trust in God more than themselves. If circumstances were dire, they were intelligent enough and disciplined enough to abstain from the marital embrace.

If we focus on the sexual act all by itself, independent of where and how it occurs, it is fairly obvious that it has one, single purpose: procreation. If we focus on the sexual act all by itself within marriage, it can be said to have the additional purpose of “mutual comfort of the spouses and remedy for concupiscence” (which has morphed into the “unitive end” in current jargon). The sexual act actually demands, all by itself, the context of marriage for perfection so, even outside of marriage, the sexual act intends both procreation (which is always possible, regardless of circumstances) and “union” in its anticipation of the context of marriage. Once again we see the “both/and” proposition, and it isn't even necessary to consult Catholic teaching to conclude this. A sexual act which concludes in procreation but which doesn't respect the actual or anticipated spousal union is disordered. So is a sexual act which consciously, intentionally, purposely and purposefully seeks to avoid procreation.

Logically, then, the intention to enter the marital embrace, while at the same time intending to avoid its perfection, is disordered – because any sexual act which rejects either procreation or union is disordered. Conversely, any sexual act which accepts and honors both procreation and union is governed by right reason. Following this thread, let us recall that our ability to order our acts by right reason is corrupted by concupiscence, and that sex is particularly vulnerable to concupiscence – even in marriage. When a couple desires to engage in the marital act, but also takes steps to avoid procreation – they are succumbing to concupiscence. If we look honestly at NFP, then, we see a remedy for concupiscence, rather than a virtuous “self-giving”. Husband and wife wish to have the physical and emotional enjoyment afforded by the marital embrace, but they want to avoid the proper end of that act – parenthood. The practice of NFP, then, can often result in the marital act being disordered, and the more the couple charts and thinks about and plans when to engage in the marital embrace, the more disordered their lives become, because “sex” has become the focal point of their daily thoughts.

But the Church, right now, apparently condones – and at times seems to actually encourage – this intentionally sterile sexual activity. How can this be? Why would the Church encourage something that is, at bottom, disordered sexuality? Remember: what makes this activity disordered is the conscious, intentional, purposeful plan and attendant actions to defeat the purpose of the sexual act (now that we have the choices we do, one of those choices is to choose to have sex that is disordered; before we had these choices, we just had sex!). It seems likely that the Church is responding to the culture and, to use the words of Our Lord, we have hardened our hearts. Jesus said that Moses allowed divorce because of the hardness of peoples' hearts, “but it was not always so from the beginning.” The same notion seems to apply here: the Church is allowing something due to the hardness of our hearts, the deplorable state of our hypersexualized culture. NFP is a permitted remedy given the hardness of our hearts, “but it was not always so from the beginning.” We shouldn't be promoting anything that is a remedy for “hardness of heart” except the Truth.

There you have it – your NFP Awareness lesson for the week: Be aware that the logic of NFP is disordered.