While the rector of the Cathedral is away on vacation, a substitute priest - who is retired, and recently celebrated the 50th anniversary his priestly ordination - has been taking over the pastoral duties.

This Sunday, of course, is "Good Shepherd" Sunday in the new liturgical calendar. And Father decided to use a "prop" (his word) to illustrate something about Jesus the Good Shepherd.

So, he brought in a lamb named Curly-Jo to Mass. He had the lamb's owner bring the lamb forward when he began his homily. 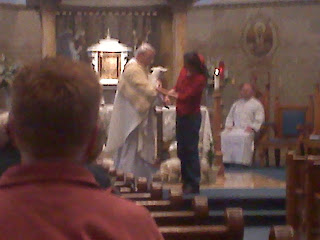 He held the lamb and talked about the Passover story from the Old Testament. And he talked a little bit about Jesus being the good shepherd and all... 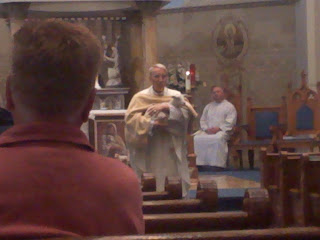 And then he carried the lamb down the center aisle so that the children could pet it. Adults could do the same, he said, since "we are all children at heart." And he noted that this was such a good thing to do for the children because "they'll always remember this". 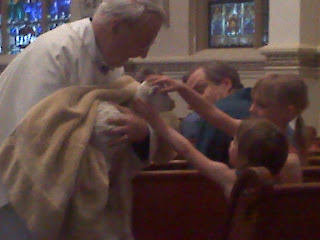 But the church is not a stable. Mass is not a circus. The Cathedral does not shouldn't run a petting zoo.

Thanks be to God we did not have the children's choir at this Mass (Saturday evening); they surely would have sung "Mary Had a Little Lamb" and we'd have heard all about how that song is really about Jesus and His Mother, and so it's entirely appropriate to sing it at Mass.

Our daughter, who went to the Sunday morning Mass, reports that Father decided that he would "take a chance" and set the lamb down to see if it would follow him. It didn't. Apparently, it does not know his voice.

She also reports that another parishioner rolled his eyes and muttered, "We have three more weeks of this." Another parishioner I know has made arrangements to go to Mass elsewhere for the time Father will be subbing (he's been here before; people know what to expect).

And the clincher: our daughter was so irritated with the liturgical shenanigans that now she feels that she needs to go to confession. That's not how Mass should affect us.

Really, I think it's time for the NO Mass to be outgrown.
Posted by Jay at 1:29 PM